I B J VAN RENSBURG

Pneumocystosis is a disease of humans and animals characterized by an interstitial pneumonia and the filling of the alveoli of the lungs by the causative parasite, Pneumocystis carinii.8 It is a rare disease in domestic animals although it commonly occurs in nude mice and laboratory rat colonies. 12

The classification of Pneumocystis carinii has been uncertain ever since its discovery in 1909. It is a unicellular eukaryotic parasite and has been grouped in the Protista. Although it was originally, and still is, regarded as a protozoon, ultrastructurally it appears to have a closer relationship to fungi of the class Ascomycetes, subclass Hemiascomycetidae.23 This has resulted in the exclusion of Pneumocystis from Levine’s 1980 revised classification of Protozoa.2

Only one species, namely P. carinii, is currently assigned to the genus. Pneumocystis carinii isolates from rats and humans have shared, as well as species-specific antigens. 26 There is, however, serological evidence that human P. carinii is different and the name P. jiroveci has been proposed for it.2 The taxonomic status of the parasite will probably soon be clarified now that it can, with partial success, be cultured in vitro.16, 18

The entire asexual and sexual life cycle of P. carinii occurs within the alveoli of the lungs of the mammalian host where they are anchored to each other and/or to the alveolar wall. After they have been inhaled, small, uninucleated trophic forms measuring 1,2 to 2 μmestablish themselves in the alveoli. The thin-walled trophic forms are pleomorphic as they adapt to the contours of neighbouring organisms or cells. They may either divide by a process described as being binary fission-like to produce two daughter cells resembling the trophic forms, or sexual reproduction may occur, resulting in highly pleomorphic precystic stages and cysts measuring up to 4 to 5 μm in diameter. These have a multinucleated appearance, as each cyst contains two to eight intracystic bodies. The cyst wall thickens to become up to 120 μm in thickness as the cyst matures. The life cycle is completed when the cyst wall ruptures, releasing the intracystic bodies into the alveoli which give rise to a new generation of small, mobile, thin-walled trophic forms. Empty mother cysts collapse to form crescent-shaped bodies. These are frequently encountered in alveoli during microscopical examination of infected lungs.1, 5, 23

An additional intracellular developmental cycle is suspected in which trophozoites pass through a developmental phase in pneumocytes to form thin-walled pneumocysts24 which are released to give rise to a new extracellular cycle in the alveoli. This hypothesis has, however, not been substantiated. 25

Pneumocystis carinii is ubiquitous with infection occurring in humans as well as in a wide variety of animal species, such as rats, mice, guinea pigs, dogs (especially miniature Dachshunds), pigs, monkeys, sheep, goats and horses. In southern Africa it was first diagnosed in humans,11, 17 and then in a goat,14 in miniature Dachshunds4, 15 and in colonies of nude mice and laboratory rats.12 Although the disease has appeared in epidemic form inhumansin central Europe, occurrence of it is generally sporadic. However, pneumonitis associated with P. carinii infection was a fairly common finding in Danish piglets suffering from retarded growth and dyspnoea.3

Immunocompromised individuals, such as premature babies, debilitated individuals, patients receiving immunosuppressive therapy, and those suffering from the acquired immunodeficiency syndrome, are particularly susceptible to infection. In horses, most cases are seen in Arabian foals suffering from the combined immunodeficiency syndrome.9 Impaired cellular immunity is more important than impaired humoral immunity when determining susceptibility.25

In humans pneumocystosis often occurs concomitantly with certain other conditions such as nocardiosis, actinomycosis, aspergillosis, cryptococcosis, and cytomegalovirus infection, as well as some types of leukaemia.20 Up to 10 per cent of humans harbour a latent P. carinii infection, the parasites becoming opportunistic pathogens and causing overt disease when an individual’s immune competence is impaired.20, 26

It is suspected that animals, and especially dogs, may serve as reservoirs for human infection. Infection occurs by airborne transmission between diseased individuals and susceptible hosts.20 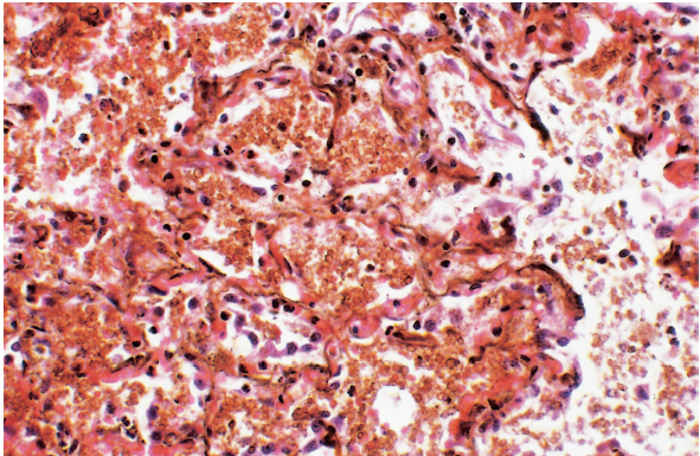 After P. carinii have been inhaled, particularly by immunocompromised hosts, the organisms cannot be controlled by alveolar macrophages and attach themselves to the type I pneumocytes of the lungs by means of tubular structures, present in all developmental forms, which extend from their surfaces. These protuberances also intermesh with those of others that promote their clustering after the parasite has multiplied.2, 4, 25 An interstitial inflammatory response consisting mainly of histiocytes, lymphocytes and plasma cells is evoked. Degeneration of type I pneumocytes is accompanied by increased permeability of the alveolar capillary membrane, resulting in the exudation of fibrin and serum proteins. These help to constitute the...