Plant-induced cardiotoxicoses are among the best-known and most important plant poisonings in southern Africa. Some of the earliest toxicological research in South Africa, for instance, the investigation of krimpsiekte and tulp poisoning, was done on plants that induce cardiotoxicoses and has continued without interruption until today. In this chapter the progress that has been made in research on these poisonings will be discussed.

Cardiac glycoside-containing plants have a worldwide distribution, yet poisoning of stock with these plants is of significance only in southern Africa126 and to a much lesser extent in Australia.217 Collectively they are the most important plant poisoning of southern Africa. In South Africa, c.33% of mortalities in cattle from plant poisonings and mycotoxicoses and c.10% of those in small stock are attributed to these plants.126 Heavy stock losses from phytogenous cardiac glycoside poisoning are recorded almost every year in most provinces of this country (Figure 1).

Cardiac glycosides are found in a wide variety of indigenous and imported plants (a number of which cause incidental intoxications), but only poisoning by tulp (Iridaceae), slangkop (Hyacinthaceae) and the succulent plakkies (Crassulaceae) is of economic significance. 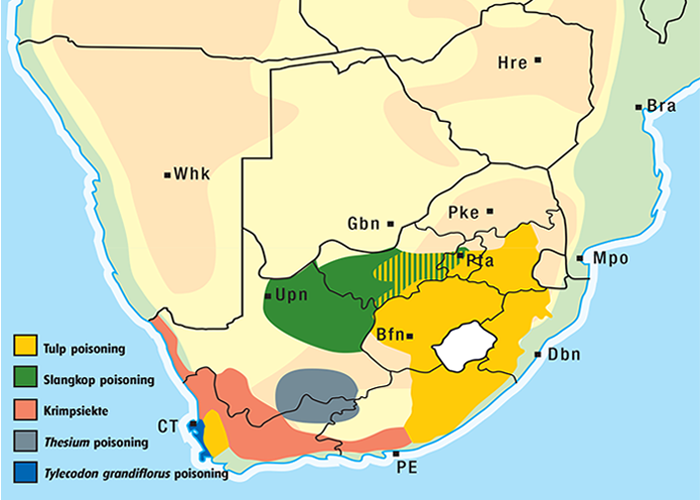 A cardiac glycoside molecule consists of a steroidal aglycone or genin coupled to a sugar-portion. The pharmacological action of the molecule is vested in the aglycone; the sugar portion having little effect apart perhaps from influencing lipid solubility. The aglycones can be chemically divided into cardenolides and bufadienolides. Cardenolides have an unsaturated, five-membered (butenolide) lactone ring on C-17 of the steroid molecule (Figure 2), while bufadienolides have a doubly unsaturated, six-membered (pentadienolide) lactone ring in that position (Figure 3).163 The naturally occurring cardenolides in South Africa are apparently non-cumulative, while bufadienolides can be either cumulative or non-cumulative in effect, depending on the plant species and cardiac glycoside involved. 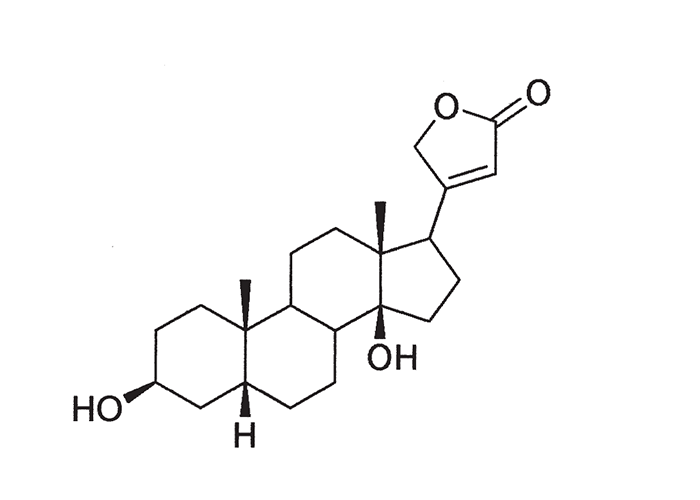 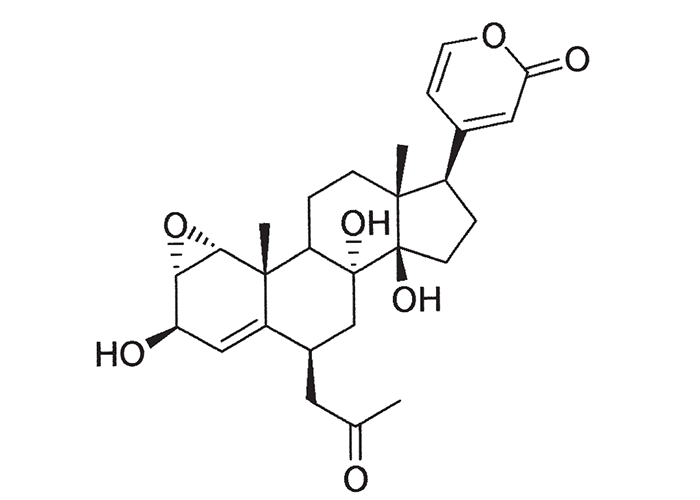 The animals most commonly poisoned by cardiac glycosides are cattle, sheep, goats and donkeys, in that order. Horses are seldom affected because they are fastidious grazers and hence avoid cardiac glycoside-containing plants.168, 231, 234 However, recently a number of horses were reported to have died of colic after eating tulp-infested hay. Cardiac glycosides could be demonstrated in the hay and organs of the affected horses using a fluorescent polarisation immunoassay vide infra (R.A. Schultz and N. Fourie, OVI, personal communication, 1996).

Intoxicated animals are generally apathetic and tend to stand with their heads down and stomachs tucked in, sometimes grinding their teeth or making groaning noises. Other common signs include tachycardia, cardiac arrhythmia, atony of the rumen, bloat, diarrhoea and weakness of the hindquarters. Acutely affected animals may die suddenly of cardiac arrest, often after even the slightest exertion.106, 160, 163, 231, 234

The gastrointestinal signs are marked by colic, ruminal stasis, bloat, diarrhoea and dehydration. Since the bloat is of a gassy type, it can be relieved by trochar. Diarrhoea is an almost constant feature of poisoning by cardiac glycoside-containing plants. The faeces are liquid, often slimy and sometimes blood stained.67, 92, 106, 160, 161, 168, 231, 232, 234, 244, 246 Notable exceptions where constipation is evident, are poisoning by Homeria glauca (now classified as Moraea pallida) in the provinces of Mpumalanga, Free State and KwaZulu-Natal163 and M. miniata in the Western Cape (D.J. Schneider, Regional Veterinary Laboratory, Stellenbosch, personal communication, 1984).

Nervous involvement occasionally takes the form of hypersensitivity, a stiff-legged or high-stepping gait, muscular tremors or spasms, and incoordination. The most usual and outstanding nervous sign is posterior paresis (Figure 4). Affected animals typically walk with swaying hindquarters160, 232, 234, 241 and can become terminally paralysed. In the case of chronic poisoning by plants that contain cumulative bufadienolides, the paretic component of the symptom complex is greatly accentuated, while the respiratory, cardiac...