According to Canham,8 Borrelia theileri was first found in 1902 in the blood of cattle, sheep and a horse in South Africa by Theiler, and causes a benign disease with a very low mortality.4 Borreliosis has been reported from many countries in Africa,1, 12, 16, 21, 22, 27 South America,10 and Europe,11 and from Australia,7 Mauritius3 and Madagascar.26 The disease, although fairly widespread and common,12, 21 is of little economic importance and few deaths have been reported.

Borrelia theileri (synonyms Treponema theileri, Spirochaeta theileri) varies somewhat in length, being slightly shorter in solipeds than in cattle, sheep, goats and antelope.7 Most reports give its width as 0,25 to 0,30 µm and its length as 9 to 18 µm,7 but some maintain that most are 20 to 30 µm long.6 Although the organism appears shorter in solipeds, transmission from equids to cattle has been successful.12 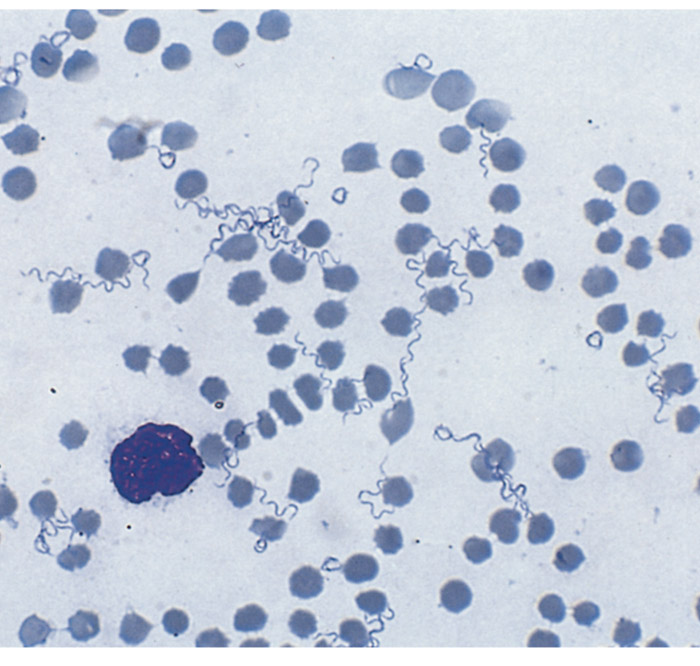 Borrelia spp. are difficult to culture and specific media such as Barbour-Stoener-Kelly are required for this purpose.17 There are no reports that B. theileri has ever been cultured in vitro: it has only been propagated in vivo in splenectomized calves.

Several tick species have been listed as vectors of B. theileri, including Rhipicephalus evertsi evertsi, Boophilus decoloratus, B. australis, B. microplus and B. annulatus. 2, 6, 7, 21, 22, 24, 25 The nymphal and adult stages of these ticks are more infective than the larvae and the parasite is passed from the parents via the eggs to their progeny.24 Infection by B. theileri is often associated with infection by Babesia spp., which has led some workers to believe that B. theileri may be of secondary importance.12, 27

Following a prepatent period of two to three weeks,7, 20, 23 spirochaetes are usually found in the peripheral blood at the onset of the febrile attack. This is followed by anorexia, listlessness, depression and pyrexia.5, 7, 23, 27 Anaemia occurs occasionally in splenectomized calves. A Borrelia-like organism was found in the tick Ornithodoros coriaceus, and it was postulated that it might be a cause of bovine epizootic abortion.15 Spleen smears made from aborted bovine foetuses in South Africa have revealed Borrelia-like spirochaetes which may be the cause of sporadic bovine abortions.14

A few non-specific lesions including slight lymph node enlargement and petechiae in pale mucous membranes have been described.13

Control of the disease can be accomplished by controlling the tick population.22 It has been shown in Zimbabwe that the prevalence of borreliosis is increased when the frequency of dipping is reduced.