Actinomyces bovis is the cause of focal, pyogranulomatous osteomyelitis of the mandible (‘lumpy jaw’), and sometimes also of the maxilla in cattle. In horses, the organism has been implicated in ‘poll evil’ and ‘fistulous withers’, while in pigs, a closely related organism, A. hyovaginalis, causes a granulomatous mastitis.

Actinomyces bovis, isolated from cows with lumpy jaw, was first described by Harz in 1877.11, 21 The disease has been recorded in most countries,24 but it usually occurs sporadically in cattle in southern Africa.11 In the past ten years, A. bovis has been isolated only rarely at the Onderstepoort Veterinary Research Institute in South Africa, probably because clinical diagnosis is easy and specimens are seldom submitted for confirmation of the diagnosis.12

Actinomyces bovis is a facultative anaerobe. Colonies on brain–heart infusion agar are white to greyish-white. The organisms are straight or slightly curved Gram-positive rods (0,2 to 1,0 μm thick) or slender, branching filaments (1 μm thick and 10 to 50 μm long). Two serovars are recognized, one of which tends to be more filamentous.28 Some growth and biochemical characteristics are given in the introduction, Irregular, non-sporing Gram-positive rods: Table 1.

Actinomyces bovis is believed to be a commensal on the oropharyngeal mucosa of cattle;8, 20, 27, 28, 31 the oral mucosa of calves appears to be colonized during the immediate postpartum period when they are licked by their dams.14 The bacterium is not a normal soil inhabitant and has not been isolated from plants or soil.11 It may, however, be transiently presenton feed contaminated with saliva or exudate, but probably does not survive for long outside the body of the animal.11

In cattle, lesions commence when A. bovis gains a foothold in the submucosal tissues following mechanical trauma to the oral mucosa (e.g. by foreign bodies, coarse feed or silage), after the shedding and eruption of teeth,8, 14 or as a complication of periodontitis.20, 24, 31

Actinomycosis generally affects cattle between two and five years old.11 Of the laboratory animals, only the hamster is fairly susceptible to artificial infection with A. bovis.10

Little is known of the host–parasite interaction in A. bovis infections. 8 The presence of A. bovis in the oral cavity may explain why lesions occur more frequently here than at other sites of the body. The initial lesion, a necrogranulomatous inflammation, usually occurs in the mucosa and submucosa of the gums, from where it extends to, and invades, the adjacent mandibular or maxillary bone, causing a chronic, pyogranulomatous osteomyelitis.

In lumpy jaw, the first sign is usually a painless, localized, hard, immovable swelling of the mandible or maxilla at the level of the central molars. The lesion develops slowly over months. The swelling is often not detected clinically until a discrete, hard, osseous enlargement develops on the lateral surface of the mandible or maxilla, at which time the teeth in the affected area are often malaligned, buried in granulation tissue, and painful. The infection may extend to the adjacent soft tissues of the tongue, pharynx and subcutaneous tissues of the head and neck to cause further disfigurement and, in some animals, impairment of mastication or breathing.11, 20, 24, 31 Spread to the regional lymph nodes34 may occur, while involvement of the lungs, liver and vertebrae is rare.8 The animal may eventually become emaciated, in which case it will have to be culled.24

In the affected bone, necrosis and proliferation of bone and granulation tissue occur together and give rise to an enlarged, honeycomb appearance (Figure 192.1). Small abscesses, sinuses and sequestrated trabeculae of the affected bone (‘bone sand’) are also found in the lesions20 and there is extensive proliferation of granulation tissue in the soft tissues adjacent to the affected bone. Frequently, multiple sinuses open onto the skin of the head or mucous membrane of the oral cavity, discharging a thick, mucoid, tenacious, copious, greyish-yellow, non-odorous exudate which contains small granules of 1 to 3 mm in diameter. During the earlier stages of their development, these granules are soft and yellowish-white, but later they become opaque and hard as a result of mineralization, at which time, because of their consistency and colour, they are referred to as ‘sulphur’ granules.1, 3, 13, 20, 24 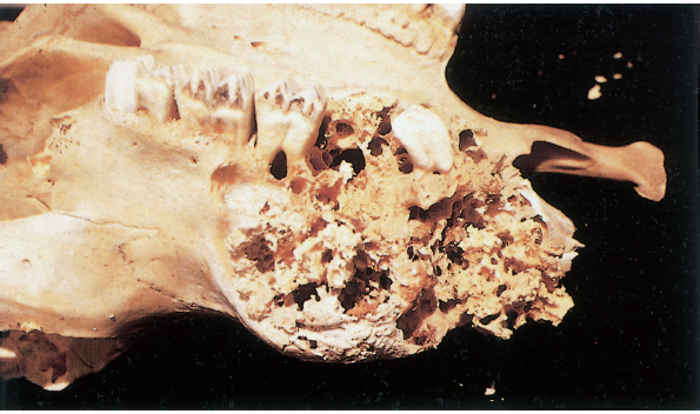 Figure 192.1 Actinomycotic lesion in an ox. Note the honeycomb appearance caused by extensive necrosis and concurrent proliferation of bone

Actinomycotic granulomas are characterized by the presence of ‘sulphur’ granules in an exudate composed of varying numbers of neutrophils and large epithelioid cells in the centre, and Langerhans’ giant cells, lymphocytes, plasma cells and dense connective tissue on the periphery of the lesions.13, 18, 19

Smears made from crushed granules reveal a conglomerate of filamentous bacteria surrounded by tissue reaction material and pus.24, 28 ‘Sulphur’ granules observed histologically in tissue sections are smaller than those in smears prepared from the exudate. In tissue sections, the granules are eosinophilic and consist of a matrix composed of a hyaline...