Actinobacillus equuli is the cause of a peracute to chronic septicaemic condition of new-born foals, referred to as sleepy foal disease. Localization of the bacteria may occur in many tissues or organ systems, including the joints, lungs, heart and kidneys. This results in lesions such as purulent polyarthritis, bronchopneumonia, valvular endocarditis, myocarditis and embolic suppurative nephritis. It may also occasionally be the cause of abortions in mares and septicaemia and arthritis in new-born piglets.

Diseases caused by A. equuli probably occur in most countries, but in South Africa they are sporadic. Only 39 cases of disease caused by A. equuli in horses and one case in pigs were diagnosed bacteriologically at the Onderstepoort Veterinary Institute between 1987 and 1998.5

Actinobacillus equuli was first described by Meyer in 1910 in South Africa, who isolated the bacterium from kidney abscesses in foals and named it Shigella nephritidis equi.4 In the older literature a variety of other names were used for the organism, such as Bacterium viscosum equi and Shigella equirulis.1

The cultural, morphological and other characteristics of A. equuli are outlined in the introduction to Actinobacillus spp. infections. A number of closely related strains such as the apparently non-pathogenic Taxon 11 should be distinguished from A. equuli.18, 1, 2

Actinobacillus equuli infection and resultant disease occur particularly in horses and occasionally in pigs. Healthy mares and sows may be carriers of the bacterium in their genital tracts (cervix and vagina) and less often in their upper respiratory tracts, particularly the tonsils,11, 20 but the most common site in healthy horses is the oral cavity.19 Horses may be carriers of different strains of A. equuli; it is not known whether all the strains are pathogenic to foals.3, 19

Foals most commonly become infected during or soon after parturition, by direct contact with the saliva19 or infected genital tracts of carrier mares. Transplacental infections and infection via the umbilicus may also occur. Foals less than two weeks old are usually affected, in particular those with a deficient colostral immunity.17

Although piglets are rarely affected by A. equuli, septicaemia complicated by arthritis and meningoecephalitis occurs most commonly in them during the first week of life and immediately after weaning.12 Actinobacillus equuli may also rarely cause metritis and abortion in sows.9, 10

Signs of septicaemia are usually evident in foals suffering from peracute or acute sleepy foal disease, while those that are affected by the subacute disease generally reveal suppurative lesions in various tissues.

Foals afflicted by peracute disease are born weak, refuse to suck, or do so sluggishly, and are feverish, dull, listless and lethargic. They stand with heads hanging and ears drooping before they become recumbent and die. They seldom live for more than 24 hours.16

The clinical signs of the acute disease in foals are characterized by listlessness, lethargy, inappetence and fever one to three days after birth. Affected foals either abstain from suckling or may suck for a short while before apparently ‘falling asleep’ with the teat in their mouth (from whence the name ‘sleepy foal disease’). Some foals may show swelling and inflammation of the umbilicus, evidence of abdominal pain, shallow and laboured respiration, diarrhoea and frequent micturition before death supervenes usually within a week.1, 7, 11

Foals affected with the subacute disease reveal signs of purulent arthritis and/or bronchopneumonia, which usually develop two or three weeks after birth, but these signs may appear sooner or be delayed for several weeks. The first sign of illness is usually lameness, associated with a variable amount of swelling of one or more joints. The lameness soon increases in severity. Foals often lie down, rise with difficulty, and progressively become weak and emaciated. 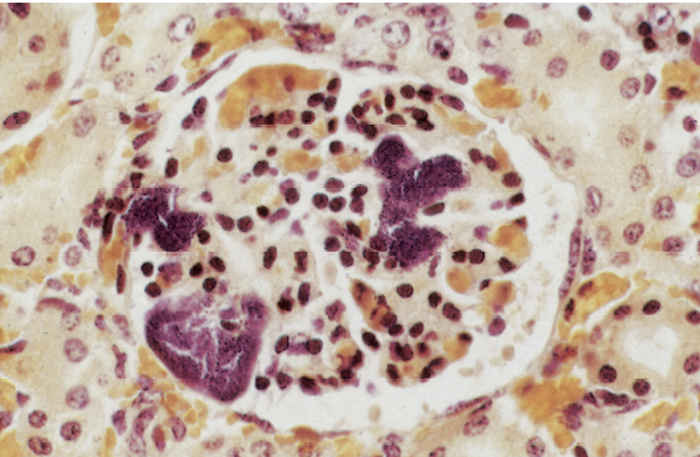 In some cases a suppurative omphalophlebitis is present. Many affected foals also manifest signs of purulent bronchopneumonia, such as an increased respiratory rate, painful cough and purulent nasal discharge. The organisms are frequently localized in other organs or tissues, particularly the kidneys and myocardium, and evidence of this may be manifested clinically.1, 7, 11 The course of the subacute disease is protracted and the mortality rate usually not as high as in the peracute and acute disease. The older the foal when clinical signs appear, the greater its chances of recovery. In foals that survive, convalescence is slow and the animals may be emaciated for a protracted period before improvement becomes apparent.4

Actinobacillus equuli is a rare cause of abortion in mares at any stage of gestation. The organism reaches the genital tract either haematogenously or, more frequently, as an ascending infection. Other manifestations of infection are purulent rhinitis, pneumonia and polyarthritis, and tendovagitis in older foals. Wound infections, abscessations and peritonitis may occur in adult horses.3, 7, 8